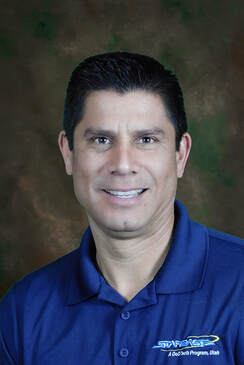 Batman
STARBASE Hill Director
Batman spent 21 years in the United States Air Force before retiring in 2014.  He immediately came to STARBASE Hill as an instructor and Batman was born!  He taught for STARBASE Hill until 2016 and decided to move to the local school district's classroom.  The Title I arena promptly piqued his interest and he taught 5th and 6th grade for these schools.  Batman returned to STARBASE Hill in 2019 and couldn't be more thrilled to receive the opportunity of directing such a vital and outstanding program.  When not busy with STARBASE Hill, Batman loves running, reading, music and movies, but most of all hanging with his family, especially his four grandkids.
"Sciences provide an understanding of a universal experience; Arts are a universal understanding of a personal experience... they are both a part of us and manifestation of the same thing... the arts and sciences are avatars of human creativity." -Mae Jemison 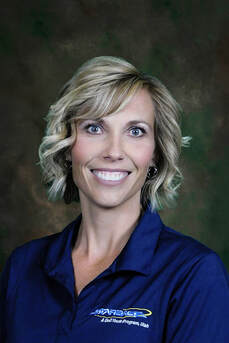 Marvel
STARBASE Hill Office Manager
Marvel comes to STARBASE Hill as an office administrator from a local elementary where she was the "jack of all trades and Master of ALL".  After living in six states throughout her life (not even being in the military herself) she has settled in Utah for the last eight years with her husband and six kids.  Interestingly enough, some of her bestest of friends are her four dogs (three Golden Retrievers and one Great Dane...yep you read it right).  In her "spare" time, she loves home improvement projects, going out to dinner, and even has a hair salon in the basement of her home.
"Science, my lad, is made up of mistakes, but they are mistakes which it is useful to make, because they lead little by little to the truth." -Jules Verne 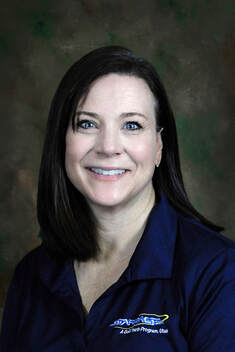 Ariel
STARBASE Hill Instructor
Ariel loves robotics and began her STEM adventures by starting VEX teams with a local elementary school.  Her vision and guidance resulted in the teams consistently competing in Utah state and World's competitions.  Her greatest joy happens when helping students make STEM discoveries and enliven their future interests.  She has lived in Utah for over 16 years, has an amazing husband and four beautiful girls.  Ariel's favorite hobbies include:  anything involving water and a beach (of course!), skiing, pickleball, curling up with a good book, and spending time with her family.
"What you do makes a difference. And you have to decide what kind of difference you want to make." -Jane Goodall 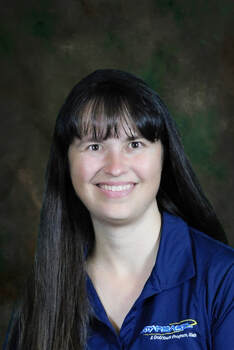 Magic
​STARBASE Hill Instructor
Magic originally began her teaching adventures in the classroom where she taught Jr. High Math and the 6th grade for over 10 years.  After a hiatus to raise her own children, she has returned to teaching with STARBASE Hill.  She loves seeing students learn new things and connect them with things they already know...it's "magical"!  When not at STARBASE Hill, Magic wants to read, hike or backpack all up in the mountains.  She has been to some really "magical" places like Machu Pichu, The Pyramids of Giza, Tikal Ruins in Guatemala, The Eiffel Tower, Stonehenge, Petra in Jordan, and The Temple Mount in Jerusalem.
"Because you are human, you do have magic. Get in touch with it." -Leo Buscaglia 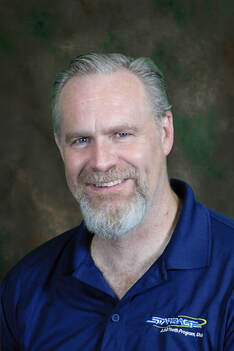 Mr. E
STARBASE Hill Instructor
Mr. E (pronounced "mystery") has lived collocated to Hill Air Force Base the majority of his life, with brief stints in Hawaii and the Amazon Jungle (this is an actual place, not just the craziness one experiences when shopping online).  He received his Bachelor's degree in Biology from Brigham Young University and his Master's degree from the University of Utah.  Teaching became his immediate calling as Mr. E taught for 30 years prior to his retirement in 2017.  A crowning achievement for him came as a streak where the Science Olympiad team he coached won the Utah State Championships for 25 straight years.  Mr. E has always wanted, but believes his time to have passed for skydiving and visiting space as an astronaut.
John Glenn, the first American astronaut to orbit the Earth, stated, "As I hurtled through space, one thought kept crossing my mind- every part of this rocket was supplied by the lowest bidder!" 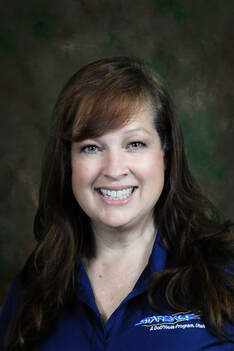 Peppermint Pattie
​STARBASE Hill Instructor
As the veteran of the group currently starting her eighth year at STARBASE Hill, Peppermint Pattie has taught children of all ages for over 20 years.  She fulfills her dreams in the mountains where she lives with her wonderful family which includes her husband, five kids (until they left to start their own lives), horses, cattle, dogs and cats.  Her interests include testing the laws of Physics, creating chemical reactions and testing scientific theories, however she spends a lot of time skiing, snowmobiling, photographing, horseback riding, writing music, hiking, international traveling and the occasional detonation of stuff...sounds like she needs a hobby or two...
"Promise me you'll always remember: you're braver than you believe, stronger than you seem, and smarter than you think." -Christopher Robin 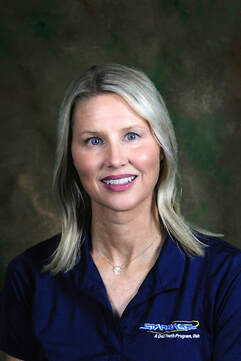 Skyfire
​STARBASE Hill Instructor
​You can always find Skyfire on the go, maybe that's why she used to teach an exercise class!  She loves science and has since she was a little girl.  Her grandpa taught science at Ogden High School for many years, so his house was a STEM funhouse where he continuously wowed Skyfire with the mysteries of the universe.  Skyfire understands the hands-on, mind-on emphasis of STARBASE Hill because of her experiences with her grandfather and has brought this to the students in her classes.  Believe it or not, she has other loves, to include: her husband, her four kids, traveling, cleaning her house (no, but really) and taking care of her beautiful yard.
"The important thing is to never stop questioning." -Albert Einstein 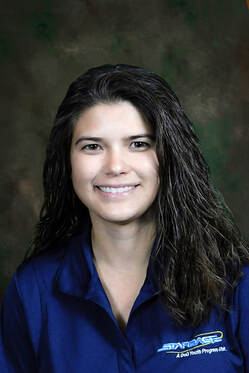 Griffey
STARBASE Hill Instructor
Coming to STARBASE Hill all the way from Michigan, Griffey has been a great addition to the team.  Speaking of team, Griffey loves all sports.  On the professional level she follows teams like the Detroit Lions and Tigers (no their aren't any bears in Detroit), but her real love is her alma mater, the Michigan State Spartans.  She grew up playing soccer through high school and has coached soccer for kids age seven all the way through varsity at the high school level.  When she's not at STARBASE Hill, she literally goes all over the world having been to 13 Major League stadiums, 6 NFL stadiums, Korea, Amsterdam, London, Panama and Iceland.
"One, remember to look up at the stars and not down at your feet. Two, never give up work. Work gives you meaning and purpose and life is empty without it. Three, if you are lucky enough to find love, remember it is there and don't throw it away." -Stephen Hawking 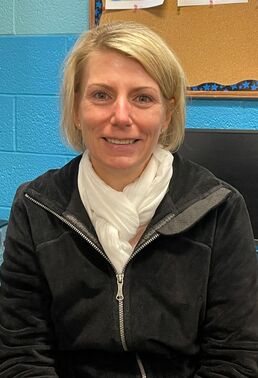 Tahoe
Instructor STARBASE Hill
Kamara comes to us from the great state of Nevada where she taught all upper grade and advanced level science courses at a Lake Tahoe area high school.  She brings her high energy approach to the classroom here at STARBASE Hill.  "I speak math," is her introduction and, "science rocks, I genuinely love science because it's hands on...you don't teach philosophy or theory, it's learning by doing," is her mantra.  Outside the classroom, Tahoe loves to be outdoors running and hiking; "I'm happy with dirt or snow under my feet."  She admits her talent isn't running fast, running forever...sounds like some of our area marathons are in her future.  If not active outdoors, you can find her reading or watching movies.
Nothing in life is to be feared, it is only to be understood.  Now is the time to understand more, so that we may fear less.” – Marie Curie 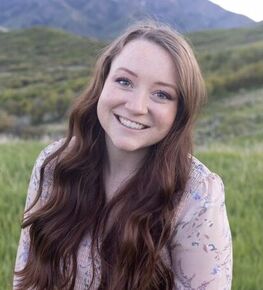 Rey
Instructor, STARBASE Hill
Having just graduated from Brigham Young University in Provo with a degree in Communication Disorders, Grace gives STARBASE Hill another approach when engaging all students.  She admits to being a nerd with her many interests in Star Wars (of course), superheroes, Disney and everything STEM.  However, when not reading or watching movies, she loves spending time with her husband being outdoors hiking, biking or playing pickleball.  Also, don’t be on the wrong side of a board game as she is highly competitive.
“You can fail at what you don’t want.  So, you might as well take a chance at doing what you love.”  - Jim Carrey 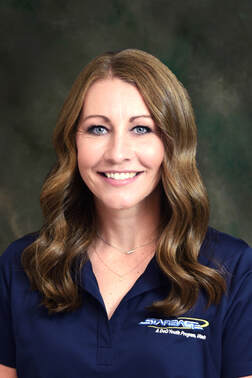 Tomahawk
STARBASE Hill 2.0 Coordinator
Tomahawk comes to STARBASE Hill after tutoring Math at a local district for the last five years.  Tomahawk loved Math and, as she describes, the "light bulb" moments that happen when a student grasps onto a new concept that had them previously stumped.  When not at STARBASE Hill she loves to watch baseball (especially the Braves and Reds Sox), fish, hunt, hike and camp all with her husband and three kids who mean the world to her.  Currently, she is earning a professional studies degree with an emphasis in accounting and social media marketing from Brigham Young University-Idaho.
"All sorts of things happen when you're open to new ideas and playing around with things." -Stephanie Kwolek 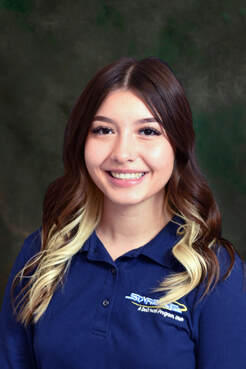 Thrifty Kitty
STARBASE Hill Classroom Aide
Thrifty Kitty just graduated from high school this past year, culminating an outstanding high school career.  She has always had a love for STEM where, even as a kid, you could find her experimenting and sleuthing with the multitude of kits from the Discovery Channel or CSI.  When her mom worked to obtain her teaching certificate, Thrifty Kitty gained a great respect for the value of teachers.  This led her to becoming a 4-H camp counselor at the University of Utah.  When she isn't "STEMming" it up, you can find Thrifty Kitty crocheting, making crafts, and up-cycling vintage furniture and clothing.
"The scientist is not a person who gives the right answers; he is the one who asks the right questions." -Claude Levi-Strauss 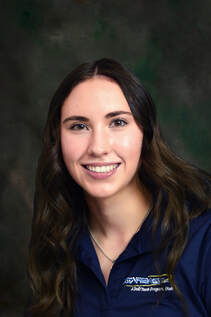 Maestro
STARBASE Hill Classroom Aide
Maestro comes to STARBASE Hill after just graduating from a stellar high school career.  High school emphasized her love for Chemistry as she excelled as a Chemistry tutor and member of the Chemistry club.  Admittedly, she likes calculus just as much.  She currently attends Weber State University pursuing a degree in Bio-Chemistry.  Makena really enjoys music, even being named the Drum Major for her high school band for her senior year.  Maestro can play the piano, flute, trumpet, organ and tops it off with singing and composing her own music.  When not around music, you can find her hiking, tearing up the pickleball court or hanging with her friends.
Nothing in life is to be feared, it is only to be understood.  Now is the time to understand more, so that we may fear less.” – Marie Curie